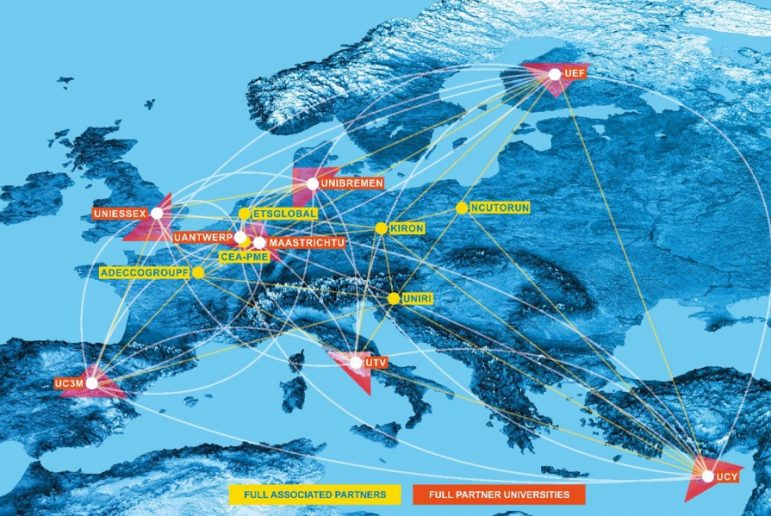 The Young Universities for the Future of Europe (YUFE) alliance was present in Brussels during the kick-off event of the European Universities Initiative. Nicolaus Copernicus University in Toruń is one of the YUFE associated partners.

YUFE is one of the 17 alliances of European universities selected by the European Commission to develop and implement the first models for a European University. Professor Martin Paul, Chair of the YUFE alliance and President of Maastricht University that leads the consortium, said: “Our alliance, including ten young universities, will build the first European University of the future that is open to anyone.” The YUFE alliance also announced the appointment of Dr. Daniela Trani as Managing Director. Both she and Cyprus born UM student Costas Georgiades participated in the official kick-off programme.

The YUFE European University will enable prospective students to compile their curricula, choosing from programmes offered at each of the eight YUFE universities. To allow access to all systems and facilities of these universities, the alliance will introduce a YUFE student card, valid at all participating universities. The official language of YUFE study programmes is English, but students who spend a period at a university in another country are encouraged and supported to learn the language of their host country. When they have successfully completed their studies, students receive a European diploma that will be valid anywhere in Europe. The diploma will not only acknowledge students’ academic performance, but also acknowledge their effort in mobility, language learning, professional training, job shadowing and community volunteering. The YUFE programme itself also pays a lot of attention to the specific regions in which the YUFE universities are located. When it comes to internships, for example, every university will work together with local authorities, the business community and other organisations. These collaborations are based on challenges that are of great importance to the YUFE regions.

“YUFE is founded on the principle of social responsibility, and, above all else, to putting students at the forefront of everything we do. This is why in our initiative students have played and will always play a leading role being part of all governance bodies and co-creating this European University”, says Daniela Trani. “Next year, we want to launch the first pilot programmes that will allow students from all backgrounds to learn at our 10 partner universities – including associated partner universities – but also to get to know the language, the culture and the people of the YUFE cities and regions. Another key element in YUFE is employability of our graduates. We will work side by side with public and private sector to ensure YUFE students develop competences tailored to the labour market needs and that make them highly employable professionals everywhere in Europe.”

About YUFE :The Young Universities for the Future of Europe (YUFE) alliance is a major strategic partnership established between ten young research-intensive universities from as many European countries, joining forces with four associated partners that have core competencies in employability and inclusiveness. The YUFE alliance aims at bringing a radical change in European higher education by establishing itself as the leading model of a young, student-centred, non-elitist, open and inclusive European University. A unique ecosystem linking universities to communities, YUFE will be based on cooperation between higher education institutions, the public and private sector, and citizens across Europe.