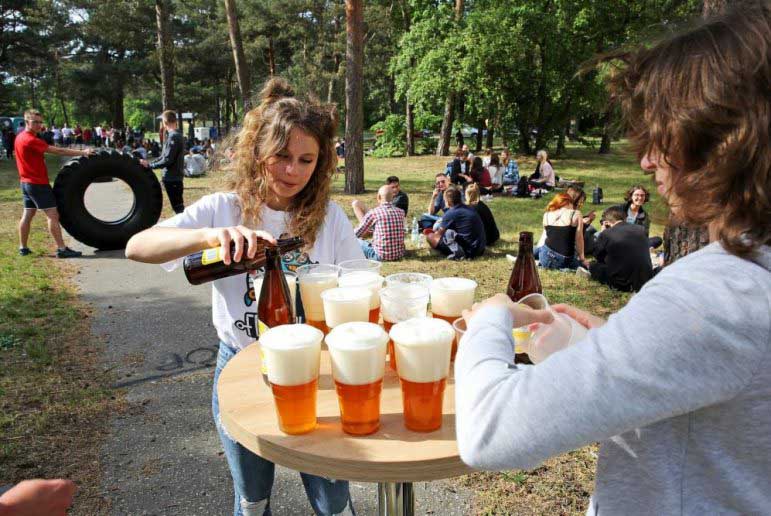 Our mental condition was a little influenced. While drinking in public places is usually prohibited in Poland, there is this one weekend, when nobody cares: Juwenalia. It’s a huge student festival with concerts, cultural program and …a lot of alcohol.

One tradition is to dress yourself up as something stupid: like a cow or a princess, and beg for money by the traffic lights. But you don’t donate the money for a good cause, you just spend it for alcohol. And people are actually giving you money.

My Juwenalia started on Friday evening. Packed with beer me and my three german friends headed to the campus. The whole area was crowded by drunken students. Just as we arrived, we saw three students walking on the roof of a covered path. Obviously this wasn’t allowed. That’s why the policemen followed them on the ground. As the students jumped down, one could run away. The others were caught by the police. Sad for them. Funny to watch.

Next we went to student club Od Nowa. Outside were a bar and a grill. Beer and sausage with bread each for 5 zł. That could have been our place for the night. But after a while one of my friends realized, that he had lost his cigarretts. To the gas station!

On the way we met a friend of mine from the polish course. Sławek, a Russian from Uzbekistan, was already way more drunk than us. No wonder we lost him on the way. But before he explained us important strategic position of Uzbekistan. Germany had its only military airport in central Asia there. He was outraged by the fact that we did not know. It was probably for good, that we didn’t tell him, that we also had no clue were Uzbekistan is on the map.

Equipped with new cigarrets, we came back to Od Nowa. Time to dance! As we went inside I already put up with shitty charts music like Despacito (seriously guys, what is wrong with you?) But to my suprise there was a real DJ with some nice Techno. We danced till the club closed and went home. It was a good night.

The morning after wasn’t. We hardly made it out of our beds. Total hangover. But hey, we had a TV. And when it’s already hard for you to hit the painkiller in the glass in front of you, still you can follow the marriage of Harry and Meghan.